A SCORE TO SETTLE, Starring Nicolas Cage, is Worth Checking Out

Howdy, y'all! McEric here with a review for your review-reading eyes! 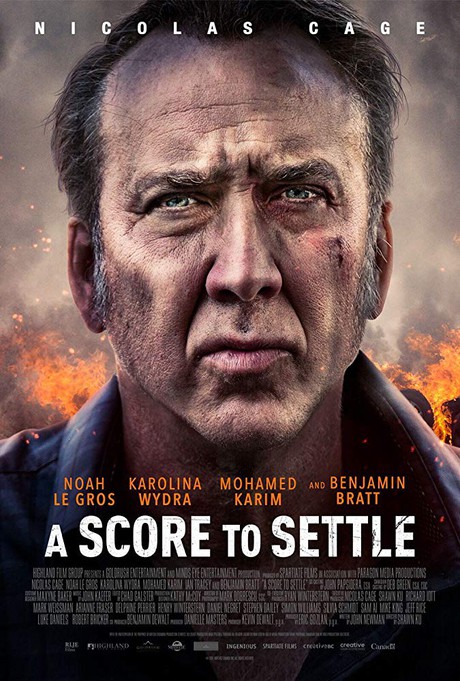 I can read your mind. You’re looking at that cover art and reading that rather uninspired title and thinking “Oh, great! Another Nic Cage bargain title. Exactly what no one asked for.” And you’re right; I don’t feel this movie is putting its best foot forward, so please allow me to do that for it.

The film opens in the past, twenty years or so prior to now. We meet a younger Frankie Carver, looking very much like a young Nic Cage. I stared at the actor onscreen for a long time, wondering if it was a lookalike or a digitally de-aged Nic. I stuck around for the credits and saw that it was the former, and the familial resemblance was verified; it was a young actor with the last name “Coppola”.

We see a shady crime family doing crazy shit, and soon a man is dead. We flash forward to now, where we find our boy Frankie (Cage), now a much older man, holding a thousand yard stare and doing his best Chazz Palminteri impression. He’s being told by his releasing physician that his insomnia will inevitably end his life, and soon. He returns to his prison cell to gather his collected photos, then he is released from prison, IN THE DEAD OF NIGHT. I know practically nothing about the criminal justice system but I’m pretty sure that’s not how anything ever happens. But it looks good on film.

He is greeted by his son Joey (Noah Le Gros) and together they walk into the night, on into the morning, talking easily about the missing years between them. 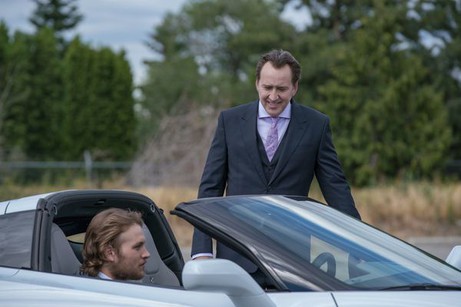 From there, A SCORE TO SETTLE drifts into its story line about a score that must be settled, chiefly Frankie’s seemingly interminable prison sentence and the life taken from him by the Family. You might be confused at first as to why he’s so angry, but you’ll learn, trust me. He employs his insomnia to allow him to spend his days with his son and his nights tracking down the old Family. The action/thriller aspects of the film are just as you’d expect from a late-career Cage flick, and that’s okay. What this picture has to set it apart from every Nic Cage direct-to-streaming tale of vengeance is heart, and plenty of it.

Noah Le Gros (DEPRAVED, Netflix’s “THE GET DOWN”) is wonderfully touching in his role as Joey, the son that grew up without his father, and his scenes with Cage are a marvel to behold. Their mutual admiration and yearning to discover one another is the true heart of the film, and their journey is its soul. You will be moved, or you’re just granite. Sorry to state the facts so bluntly, but there they are.

Cage is great, though subdued for most of the film. He never really goes “Full Cage”, but he gets close enough a few times to satiate the trainwreck rubberneckers. Benjamin Bratt proves once more that he’s an ageless spectre, as he appears mostly unchanged since his star-making turns in MISS CONGENIALITY and DEMOLITION MAN.

I understand if you’re reticent to trust me, and you’d be right to be apprehensive. This may look like another DOG EAT DOG, a film that I can’t recommend no one see ever highly enough. I will say that you would be doing yourself a disservice by not seeing this movie if you’ve ever been a Nic Cage fan or fan of vengeance films with actual heart behind the hurt. You’ll be glad that you did. 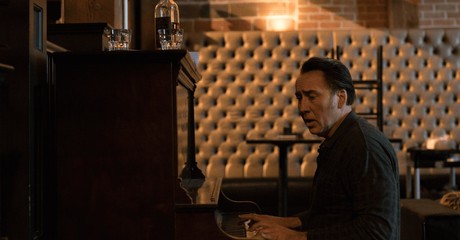 A SCORE TO SETTLE debuts in select theaters and is available on iTunes today, August 2nd, 2019.