The film’s official synopsis reads: During World War II, a U.S. military cargo plane crashes behind enemy lines in Germany's Black Forest. Maj. Johnson soon sends a squad of his bravest soldiers to retrieve the top-secret material from the wreckage. Venturing deep into the forest, the team discovers hanged Nazis and other bodies bearing ancient, magical symbols. Attacked by a powerful, supernatural force, the men soon find themselves in a fight for their lives as they try to uncover the shocking truth behind the unspeakable evil.

WARHUNT is a fairly formulaic supernatural war film, evoking similar atmospheres of PREDATOR or OVERLORD, set apart by engaging performances from Rathbone and Knepper, as well as a few standouts from the supporting cast. At his first appearance, Rourke seems nothing more than an exposition standpipe, pumping information in the air for the audience to inhale before shuffling off to a communications cave where we imagine he’ll perish in our imaginations. I was happy to see him re-emerge in the third act and, as the trailer promised, “get [his] boots a little dirty.” Knepper is just dynamite in every scene, blasting through the subterfuge and laying waste to everything around him at any given opportunity. He commands the camera like a carnival barker, evoking many fond remembrances of his character in the fourth season of “Heroes,’ much to my delight. Rathbone commands attention as “Walsh,” an operative shoehorned into Knepper’s regiment at the behest of Rourke’s character, as welcome as a wart. As we follow along we find ourselves drawn to him as he seems to know more than most, stringing along the mystery of the supernatural force at the heart of the film. I don’t want to give it away, or the twist ending, at the chance you’ll want to take the journey yourself. I will say that WARHUNT is worth the view for the encircling dread that it maintains through its runtime and the strength of its core cast.

I got the chance to chat with Jackson Rathbone about his contribution to this film and the challenges of filming during the ongoing pandemic. 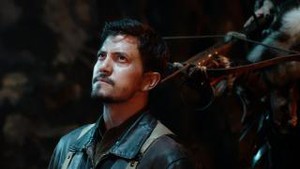 Eric McClanahan: Hey Jackson, how are ya?

Jackson Rathbone: Hey, good, Eric. How are you doing?

EM: I’m well. Thank you very much. I understand you’re a Texas boy; is that correct?

JR: I am. I grew up a bit internationally but my formative years were in Midland, Texas.

EM: Yeah, over near Houston.

JR: Another small-town Texas boy. I love it!

EM: Exactly! I knew we’d get along.

JR: Where do you call home these days?

EM: It really is. I’m dealing with my first winter here. It’s fun so far.

JR: Bundle up. As I learned in Latvia making WARHUNT, cotton socks are a no-no. Wool. Wool is the way to go. Cotton will breathe and make your feet sweat, and you get cold more, but if you wear wool undergarments, it’ll absorb it and truthfully I had to go shopping in Latvia to buy clothes to keep me warm in the Latvian winter.

EM: Nice! That’s a great set story. So, WARHUNT: how did you get attached to this project?

JR: Well they sent me the offer with the logline; you know, World War II, supernatural horror/fantasy, Mickey Rourke is attached, Robert Knepper is attached, do you want to play the lead against these characters? Uh, yes! You throw all those elements at me, I barely have to pick up a script. I like to pick my roles for a variety of reasons, but one of the biggest reasons I try to pick roles is “Will I learn something as an artist?” And to get a chance to work with legends, nine times out of ten I’ll say yes.

EM: Absolutely, and you likely couldn’t have done better than Mickey Rourke and Robert Knepper. You got some great screen time with each of them, so let’s start with Rourke. What did you learn from him? What was that experience like?

JR: You know I’m going to be honest with you: I learned that editing and producing is a ridiculous talent. We made this movie during the pandemic. Not just during, but during the onslaught of the pandemic. So by the time it got around to film Mickey Rourke’s and my scenes together, we couldn’t do it together at the same time because we had to shut down production, I was out of the country when he was in the country, and they had to film both of our scenes separately with stand-ins. Then they were able to splice it together, so it’s a great sadness that I didn’t actually get to work with Mickey Rourke in the flesh, which bums me out to no end. However, they were able to film his side first, so I was able to watch his performance and then do my performance. It was essentially like, without a chance to affect his performance, I got to work with him. 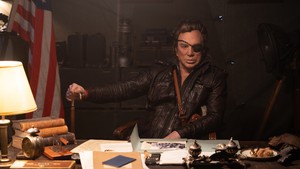 EM: Well that makes that ending fight that much more amazing, because you two play off one another as far as in the combat techniques, and to know that was matched up makes it even more impressive.

JR: Well, thank you. Yeah, it was one of those things where I studied his performance. It wasn’t one of those things where they’d show me his tape once. No, I was watching it over and over and over again; while they were setting it up I would study it, make sure I would know what his intonations would be, where his eyeline was going to be, and make sure that I’m hopefully in the same movie as Mickey Rourke, ‘cause that’s what I wanted from the get-go, right?

EM: Right? So I hope it wasn’t the same with Knepper in the forest…

JR: No, thank God. Robert Knepper is just, he’s a force, man. His energy as an actor is unparalleled. When he speaks, you listen. Not only when he’s in character, either. And he’s such a kind guy. We both have roots in the theater so we’d talk a lot about that. We’d go out to dinners together and he’s so much fun to talk to. We had such a great camaraderie that when it came time to do any of the conflict between us, we trusted each other so much. I mean, if he ever wanted to just slap me out of the blue in the middle of a take I’d just go with it. He’s one of those guys that you just want to follow when he dances. 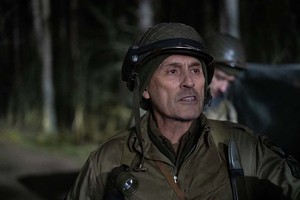 EM: Your character Walsh - how much input did you have on the character’s costume design? I noted that his uniform, down to the hat and the knife, were so distinctive and separate from the rest of the regiment. Tell me about that costume design.

JR: The costume design was interesting because that was definitely a choice that they’d made before I got to Latvia and I came in and that was the costume they had. I liked it, though. I wanted to kind of be definitely different from the rest of the crew because I’m coming from a different area and I’m obviously the outsider within the group and there are certain visual representations that you want to have for the audience and for yourself as a performer. And to also develop this sort of… you know, he’s got the hat on but then there’s a correlation to you seeing the hat come off and the true Walsh come out that I wanted to play with. And there was a certain mystique about what he was doing, with his notebook and sneaking away from the camp to relay some radio information. I wanted to make sure that this is a guy that you’re definitely kind of curious about throughout the film.

[At this point I should mention that I brought in some outside help on this particular interview. Over the holiday I learned that my nephew was attending college to major in journalism with a minor interest in acting. It seemed only relevant, then, that I bring him on as an intern in this hobby of mine since I’m something of a journalist whose medium is largely actors.]

EM: Right. I’ve got an intern here and he’d like to ask a question if you don’t mind.

Ricky Daniele: Hi, I just had a question about the vibes that you might have felt on the shoot. I noticed the cues of the forest, you’re being hunted, guys are going insane, etc. Did you have any, like, PREDATOR vibes when you were filming?

JR: Yeah, honestly, there’s a certain element of PREDATOR vibes. What was the craziest aspects of that is we were filming kind of right as the pandemic was getting going so there is a certain sense of dread in the WORLD and then you’d suddenly see certain countries just fall. Like, Italy, right? Remember when we all watched that happen in Italy? It seems so long ago now but it was only a few years. But that was on set for us. In that last week before we took a break, we would lose an actor every day. An actor would just say “I have to go, my grandmother’s sick” or “I have to go be with my family. My father is immunocompromised. I have to be there for him.” And so every day we kept losing actors. And then eventually the production had to go on hiatus for about two months before we could resume filming. And when we came back we were still in the midst of the pandemic, so there was definitely a sense of being hunted. And, if you think about it, a virus like this is kind of otherworldly, you know? It’s alien, right? So it did feel like we were being hunted. It was… I don’t know; can I curse?

JR: It was fucking scary!

EM: Yeah, definitely Life Imitating Art, there. So the film is coming out this Friday. I’m excited to see the reaction to it. What are you working on next?

JR: Well, I completed a couple of other films. I have a movie on Netflix right now. It’s called MIXTAPE, which is about as opposite from WARHUNT as you could be. It’s a family dramedy, and I get to play an aging rock star. Yeah, I get to sing and perform in the film so that was a blast. I did another movie, kind of a biographical film about this young man, called ZERO ROAD, where I get to play a “meth dealer with a heart of gold,” we’ll just put it that way. And finally I just wrapped up a movie, just recently, just now, called BOOKS & DRINKS, which will be my first foray into the romantic comedy genre. So I tried to do as much of a diversification of my portfolio as an actor in the last two years as I’ve ever done. I did WARHUNT, which I consider my first horror; because I consider horror as having to have a supernatural element, and the films I’ve done before are thrillers and there are certain elements of horror within the human psyche, but this film having actual supernatural elements makes WARHUNT my first horror film. Then BOOKS & DRINKS will be my first romantic comedy, and MIXTAPE was my first family film, you know what I mean? So I’m trying to diversify as much as possible.

EM: You got the hat trick.

JR: The Hat Trick! Yeah! Or the, what is it, the Schwarzenegger? He did all the genres!

EM: Well, we are out of time. Jackson, thank you so much for chatting with me.

JR: Hey, thank y’all! This was a blast! Good energy. I appreciate it.

EM: Thank you, man! Alright, take care of yourself. 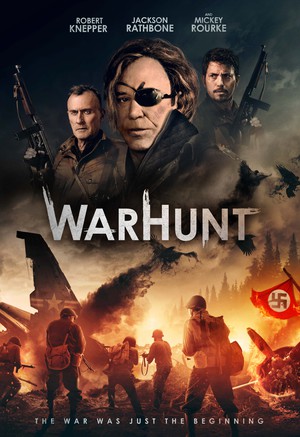 WARHUNT releases Friday, January 21, 2022 in theaters, on digital, and on demand.

Until next time, watch your six!