It will never be a bad time for a new Nicolas Cage movie. Already showing strong this year with WILLY’S WONDERLAND and PIG, Cage is back at the theater under the direction of Japanese auteur Sion Sono (WHY DON'T YOU PLAY IN HELL?) for what Cage himself has called “the wildest movie I’ve ever made.” It’s PRISONERS OF THE GHOSTLAND, and it’s truly a sight to behold. Check out the trailer:

PRISONERS plays out like Terry Gilliam remade SPACEHUNTER: ADVENTURES IN THE FORBIDDEN ZONE in 48 unblinking hours. It demands repeat viewings to bask in the meticulous insanity poured into every scene. It’s star-studded cast alone demands your attention. The titular prisoner is Sofia Boutella (THE MUMMY) as Bernice, the adopted granddaughter of the cruel and theatrical Governor, played by Bill Moseley (THE DEVIL'S REJECTS). Chief among his favored guard is the silent Yasujiro, played by Tak Sakaguchi (CRAZY SAMURAI MUSASHI). Cage plays the Hero, a flawed man of dubious past who is haunted by his old partner in crime Psycho, played by Nick Cassavetes, rewarding us with the FACE/OFF reunion we didn’t know we wanted.

It seemed like I’d been reading about this movie for years, and to finally see it is to discover that I had no idea what to expect. It is gonzo in all the best ways; Sono paints like a master, from the first frame to the last. The fantasy is rendered brilliantly, the action brutally. It’s truly remarkable work all around. 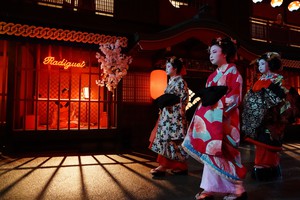 I got the opportunity to talk to The Governor, himself, Bill Moseley, and pick his brain about making this distinct slice of cinema and working with masters like Cage, Sono, and Sakaguchi. 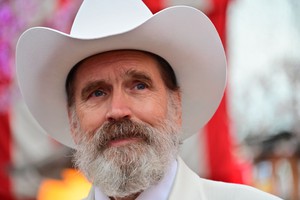 Eric McClanahan: Good morning… afternoon? Hello. How are you?

EM: I’m great. Let’s talk about PRISONERS OF THE GHOSTLAND which you just made with Sion Sono and Nicolas Cage. You’re at a dinner party and someone says “What have you been up to?” How do you say “I made this movie”? What’s your logline?

BM: Logline is: made this movie in Japan in November and December 2019. Stars Nicolas Cage and Sofia Boutella and Nick Cassavetes and one of the greatest martial artists in Japan, Tak Sakaguchi, from the movie VERSUS. I play the Governor; my granddaughter has skedaddled into a place called the Ghostland, where I am loathe to enter, it’s a spooky supernatural land, so I free Nic Cage who is in jail for life for robbing a bank where a couple of people were shot to death, and I tell him that if he gets my granddaughter back in five days he will go free. I give him a leather suit, that has little blinking lights on it, and as it turns out each of the blinking lights on both arms at his throat and over his balls, each of those blinking lights is an explosive. [laughs] So if he messes up they just could detonate, and I say Good Luck and See You Later. And off he goes into the Ghostland. 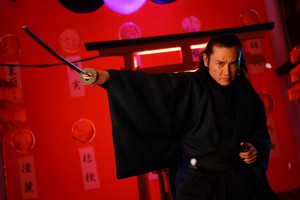 EM: So this film was shot almost two years ago? How excited are you that people are finally going to get to see it?

BM: I’m really excited. I’m very grateful that we were able to shoot it right before the pandemic gripped the globe and I’m grateful for the internet because between Tokyo and Los Angeles and however it was edited and configured and all the post-production I’m very grateful for that. I think people are going to have their minds blown. It’s an epic; a fantasy epic with Nic Cage as the Hero. I am one of the villains if not The Villain, and Sion Sono’s cinematic vision is really something that probably most American viewers, I don’t want to go out on a limb here, but maybe a lot of people don’t know Sion in the US and if they looked at some of the films in his filmography, they’re all amazing. They’re so different and he has such an amazing aesthetic, and in this movie, it is epic, it is strange, and it begs for the big screen. Even though I’m sure you’ll enjoy it on your streaming device. But it really is amazing and Nic Cage is the right man for the job. [laughs] I’ll put it that way.

EM: Now I believe this is your first time working with Cage, right? Did you feel any intimidation or just excitement? What was your experience? 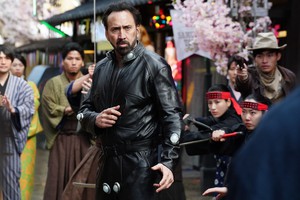 BM: It’s actually the second time because we were both in Rob Zombie’s fake trailer WEREWOLF WOMEN OF THE S.S. (from the Tarantino/Rodriguez GRINDHOUSE double feature) and I didn’t work “with” him but we did share a makeup trailer for about eight minutes. In terms of “intimidation” I was worried, or curious, to see how he went about his business, and if he was going to look at me with one of those “Are you gonna do it that way?” kind of things... but he was not at all. He was totally into his character. Totally prepared. On time everyday, great work ethic, fearlessly non-self-conscious, and he went for it. And that’s how I like to work. Where you just kind of get your personality or your humanness out of the way and just give yourself to the character and the story. It made it so much easier because Sion Sono’s sets were so incredible. Being in Japan and not speaking the language that everyone else was speaking around us; everything about it bordered on the phantasmagorical. [laughs] That was before they even said “action.”

BM: It made it a lot easier to give yourself to the story.

EM: To create that sense of “otherness.”

EM: Now this is Sono’s first American film with an American studio. Did you see any limitations placed on his vision by the American element or was it completely free?

BM: I didn’t really see any limitations, though they could have been going on right in front of me because I don’t understand Japanese, so I don’t really know what was being said or who was talking to whom, so I can’t really answer that. It seemed to me there were some American producers on the set and they were just enjoying themselves. I don’t know if there was some back room bickering going on but everybody seemed to be very excited and every day was a different crazy day in terms of, again, just the setting, itself. Both the Ghostland setting and Samurai Town, where my character, the Governor, rules. That’s the seat of his power: Samurai Town, where it looked like there were wild west saloons and a dirt street running through but at the same time there were Geisha houses and pink cherry blossoms floating in the air. [laughs] It really was this beautiful mashup of West-meets-East and that’s basically an Action-Adventure/Fantasy that is so visual and so rich which is why the people that see this, if they have a choice, I hope will go for the big screen, because it is a real feast.

EM: Now, your character, the Governor, is a ruler; definitely a despot or tyrant-type. Did you base your performance on any real life characters?

BM: No, actually. Once I got into the white suit I knew where the character was, roughly, but then, when I put on the red leather gloves I got the sense that I was everything wrong. With Capitalism, or something Western, with blood on my hands. This pristine white suit and hat, shoes, tie, vest, and then these blood red gloves. And once I put those on in the wardrobe fitting, Sion pointed at me and said “Governor!” and I was like “Yeah! Okay, I get it!” So it was a lot of fun to be playing a character, very larger than life, which is kind of how I imagine those tinpot despots would act. That was a lot of fun. It was a lot of fun to be the King and have Geishas and have Tak Sakaguchi as my bodyguard, so the whole thing was my fantasy, too. [laughs] But I didn’t let it go to my head too much. I was pretty cool, off-set, but I enjoyed playing that kind of character. 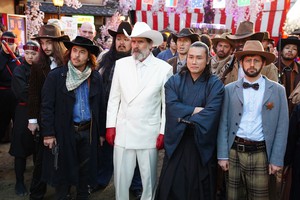 EM: You are known for starring in provocative, very out-of-the-box films, like your collaborations with Rob Zombie. What keeps you coming back to these genre films?

BM: You know, I’m a fan first and foremost. I have always been a fan since I was a little kid. On Halloween I would risk life and limb to get up in the middle of the night when I was a kid to watch THEM or LAST MAN ON EARTH; all the kind of shock theater crazy movies we would get on black-and-white TV on that side of Chicago. So I’ve always been into it, and I just find that the horror genre is one of the most fun and wide-ranging genres of filmmaking. It’s always been my favorite. I love playing monsters. Just show me a half-way decent script and I’m there; I’m into it.

EM: Thank you so much for talking to me today. And best of luck with the film.

BM: Thank you! It’s great to talk to you. Take care.

PRISONERS OF THE GHOSTLAND is in select theaters, on demand, and digital today, September 17, 2021.