JOKER, or Arthur Fleck and The Technicolor DreamSuit

Where does one begin when discussing Todd Phillips’ JOKER? I find myself in a difficult situation as so much has already been said about this feature, and like a cat to its namesake nip I have been listening. Has all this cacophony influenced my viewing of the film? Absolutely. Am I still happy to have seen the film? Absolutely.

Let’s get a few things out of the way first. I had a fantasy: Arthur Fleck (Joaquin Phoenix - INVENTING THE ABBOTS, GLADIATOR) has turned the corner to a truly villainous life. His ambitions are growing large, his diabolical machinations stretching beyond his own two hands’ capabilities. It’s time to recruit muscle. CUT TO:

An office setting. CAMERA behind three men, seated before a desk where we see ARTHUR appraising them, his hands steeped to point before his furrowed lips. He sighs, comically and exclaims, “You’ll have to do!” CUT TO:

ARTHUR’S POV: the three men (WILL FERRELL, VINCE VAUGHN, & LUKE WILSON) smile and nod to one another. CUT TO:

This scene from OLD SCHOOL. Not a shot-for-shot remake. No, the actual scene, plopped into the middle of Oscar[™] Contender JOKER. That’s what I kind of wanted.

Another thing we have to get out of the way right away: People are going to tell you this movie is goddamned amazing. They believe that. Not in the ironic way that I think that the Pledge PickUp scene from OLD SCHOOL is quality cinema (it is, but that’s not the point). People genuinely are enamored with this film, and particularly Phoenix’s performance, and they’re not wrong to feel that way.

I have to take this moment to put all my cards on the table, and I’m going to play the Joker and tell you the hysterical truth:

This movie is a joke.

This is Todd Phillips and Joaquin Phoenix’s joke, as told by Arthur Fleck, and it is being told to us while also being played on us. They’re having a laugh at our expense. Literally.

From the retro Warner Logo opening the film to the yellow title cards and accompanying timeless music cue, we can tell we’re seeing a fantasy. Everything has a realistic sheen to it, like an Alex Ross cover, but there’s an awareness throughout the film that hints that it knows it’s all a fiction; a revisionist history, if you will. The lettering and music bring to mind instantly the work of Tarantino rather than Scorsese, at first. To be sure, Scorsese’s influence will be seen soon enough, and throughout. It’s all part of the joke.

When we first meet Arthur, he’s practicing smiling. He’s contorting his face, itself, then manipulating it externally with his fingers, all towards that one goal: the smile. To put on a happy face. On the radio, we hear of the sanitation strike, the piling of garbage all throughout the city, and one can’t help but think of Marie Antoinette and the disparate idealism of the ruling class in the wake of societal breakdown. Arthur is preparing for a day as a clown, nothing more. He’s not bitching with his buds about politics or praising Lenny Bruce; he’s unperturbed. He’s focused on the task before him. 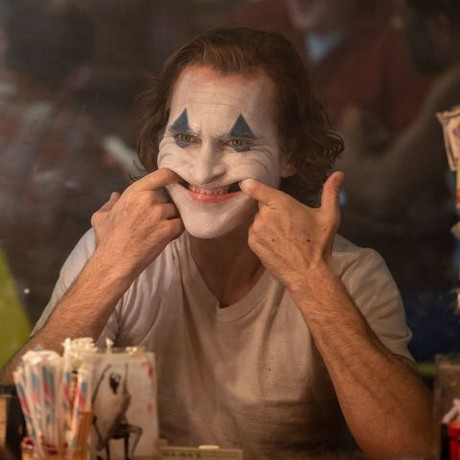 This autonomy isn’t the most important lesson we learn of Arthur at our first meeting; rather, it’s his lack of control over his own body. His movements are tight, tortured, and… wrong. Phoenix shows early in the film the torment of Arthur Fleck, a sunken heap of humanity hurtling through a dirty, smelly, thieving world. He has no armor, no charisma, and no magic. He’s a Dead Man Walking in a D-n-D world.

But we’re to learn he’s something else.

Arthur is harassed and victimized, but it hardly seems too out of place in the established landscape. (It is, I’ll say, beautifully photographed, with slow pulls of frame to accentuate tension.) Our next moment of insight is his visit to a social worker to renew his seven medications, where we eavesdrop on frank admissions that he’d rather be confined and without his inner torment. Here is a character introduced to us in a film about a villain stating within the first act that he’d welcome catatonia. This world, though, even the revisionist historical depiction of it, won’t allow that. “Be All You Can Be” isn’t just for the Army. It’s the American Way.

Arthur makes it home, where he bumps against an alluring neighbor, played with compassion by Zazie Beetz (DEADPOOL 2), and they share the smallest of moments. We meet up with his minimally imfirm mother (Frances Conroy, HBO’s “Six Feet Under”) who asks if she’s received any mail from Thomas Wayne. Just another day.

From this point I must deter from heading into spoiler territory. Suffice it to say, as our narrative view is that of Arthur Fleck’s, we have to often question the legitimacy of what is presented to us. What is real, and what is technicolor fantasy? And why does it seem that sometimes the fantasy, itself, carries a bit of poison along? There are revelations throughout that expand the mythology, but ultimately we surpass all of those to reach the inevitable conclusion: that Arthur had always had this thing inside him.

We are viewing the life of a character whom is, in no uncertain terms, mentally ill. Arthur’s ailments are never fully defined, and that’s for the best, I suppose, for all parties involved. Those who suffer from mental illness don’t want a particular diagnosis attributed as the “Joker Affliction”, and we certainly don’t want a shorthand for those who seek to vilify those afflicted. What Arthur truly reveals, though, is that in his moments of lucidity, when he allows himself to exist as is, through the cracks of his medication cocktail, is a graceful endoskeleton of sadistic chicanery.

Inside of him is The Joker. 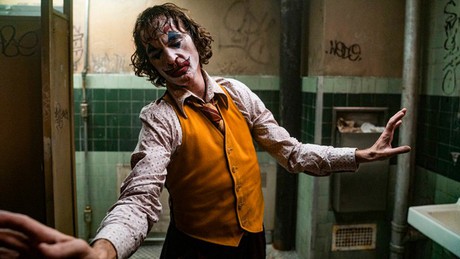 It is said that the rate of mental illness within the total population is slightly less than 25%, meaning that one out of every four people experience or suffer from sort of mental illness. After Arthur is assaulted, he is given a gun by a fellow clown to “defend himself”. He responds by quietly asserting “I’m not supposed to have a gun.” I understood this implicitly, as I know full well that if I owned a gun it would only be an eventuality that I used it on myself. We later see Arthur illustrating precisely why he shouldn’t have it as he caresses the weapon and acts out scenarios with it, a la TAXI DRIVER, and inadvertently shoots a hole in his wall. The gun became an extension of his fantasy; of what he imagines “normal people” do all the time. He mimics behavior he’s seen a hundred times on television without realizing what he’s doing.

I saw this film on a dark and stormy night. There was an armed, unifomed officer in the hallways once I had my ticket torn. JOKER, you see, sensationalizes violence, and will inspire violence in the disenfranchised. We’re all a bunch of Arthurs waiting for movies to tell us what to do with guns and our feelings. This movie will make murderous vigilantes of the sidelined.

Well, yeah. Just as much as TAXI DRIVER, GOD BLESS AMERICA, or FALLING DOWN. Which is to say, surprisingly little. If JOKER inspires anything, it’s cigarette-smoking. I decided to quit Monday and this film triggered the heck out of me.

When JOKER kicks into its third act, it does so with aplomb. As Arthur sheds his societal constraints and becomes his Id, his physicality adopts a fluidity that mimics, then surpasses the humans around him. He goes from playing the pitied among them to dancing above their comprehension. His awakening is one of blood, and there is a body count to be paid for his ascendance. Phoenix truly does amazing work in his role.

At the film’s end, we are reminded this was all a joke. The film has three conclusions, each more unnecessary than the one prior, and finally ends on a bright yellow cursive “The End.”

Like, seriously, it looked like a 40s end-title card. The last frames of the film are a Scooby-Doo inspired chase with defined framing and then to have that punctuated with the flowing yellow “The End” I realized that it all made sense. The direct comparisons to early Scorsese? The solo gunplay? Robert DeNiro? He was doing exactly what everyone thought he would do when it was first announced that there would be a JOKER movie with Scorsese attached. Todd Phillips made a Scorsese Joker film, as a joke. The entire film is a joke. 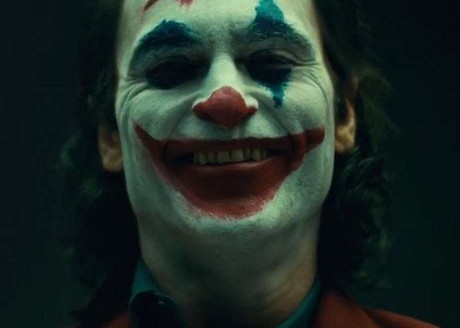 There were many points in the film when I heard the audience laugh at points that they weren’t supposed to, and I know now that it’s all part of the joke. Todd Phillips wrote a script and encouraged the editing of this film with a sympathetic performance by Phoenix to make us laugh at our own penchant for suffering and violence. This film is a well-timed joke on its viewers, their expectations, and their demands.

The film has many ties to the DC Universe, but to appreciate it fully is to divorce it from its comic origins. I say this as a Superfan. It surprises even me, but I assure you: this film is not about the Joker, or Batman, or DC Comics.

It’s about you and me and Todd Phillips and Joaquin Phoenix. This is a personal dialogue that doesn’t need any extra baggage. Just be here for it.