Ken-With an exclusive clip of AUGGIE from Samuel Goldwyn Pictures.

So what is AUGGIE about?
Here’s the trailer:

Felix Greystone (Richard Kind) is a man begrudgingly forced into retirement.  He receives your usual compliment of farewell gifts and some odd glasses named Auggie.  He stores the gifts at his home and tries to figure out what to do with the rest of his newfound free time.  He’s clearly one of those – my job is my life – types.  His wife Anne (Susan Blackwell) is successful in her own right.  Just as Felix retires, she’s offered a massive promotion at work.  The complications keep coming.
One day while chilling at his house he pops on the “Auggie” glasses and “poof” she’s sitting next to him.  It’s unsettling as Auggie in the flesh (Christen Harper) is not only stunning, she’s attentive.  He takes them off like a good married man and continues on his way.  But then idle life, mental strife and a successful wife, pull him back to the temptation of the glasses.

The movie does an amazing job of making one feel like they're wearing the glasses.  You never actually see Felix and Auggie together.  He is alone and puts on the glasses and the camera pans to her alone.  Their relationship builds to something uncomfortably inappropriate, through these shots of Felix spinning around to Auggie.  It has an unsettling effect while ironing down the fact Auggie isn't real.  It’s a daring choice that absolutely benefits the film.

You see what I mean?

Richard King as Felix, is the perfect joe-blow retiree lured to the impending glasses point of view.  There’s all kinds of uncomfortable questions this movie presents.  Some feel horrific, some off-putting, yet in the end this is story of the heart.  It’s a tale of real life wrapped up in a tidy sci-fi themed bow.

Matt Kane directs this film so assuredly for his feature debut I definitely want to see what he does next.  Working off of an understated script he co-wrote with Marc Underhill, the movie lets your mind walk all the dangerous territory it avoids filming.

If you want an action packed film, you’ll definitely be better off elsewhere.

If you are looking to think deeply about AI and its role in our lives moving forward, then it becomes quite interesting indeed.  This all feels close.  Like it’s lurking around the corner.  Probably because it is.

I wonder how long it will take before we are reading weekly stories of beautiful augmented realities tearing relationships/marriages apart.

AUGGIE is out now.  Check it out and let me know what you thought.  I rather unabashedly enjoyed the premise and execution. 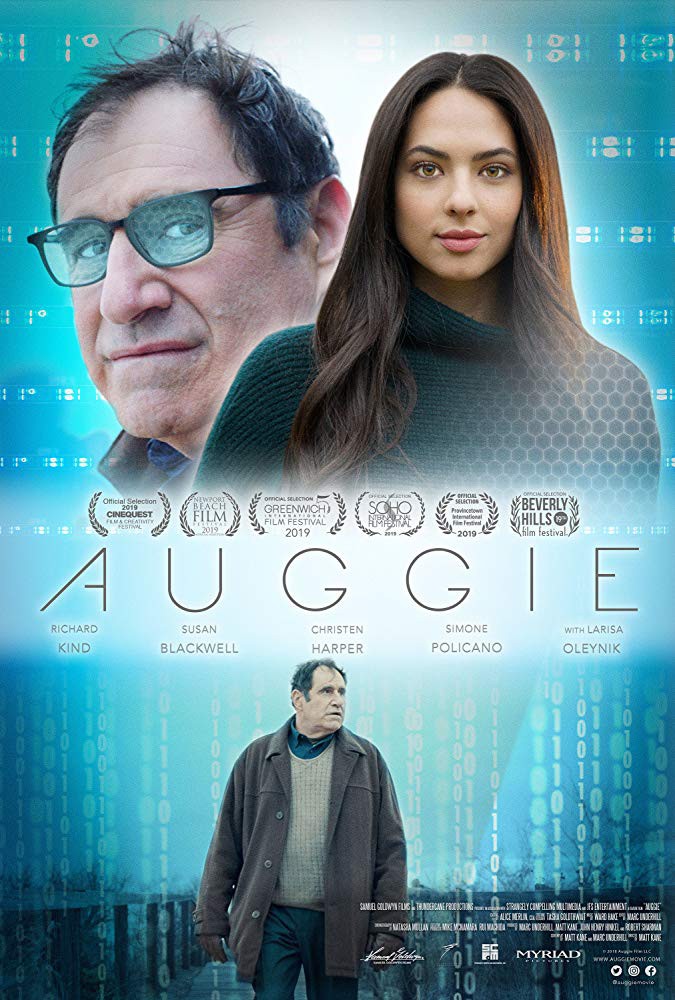