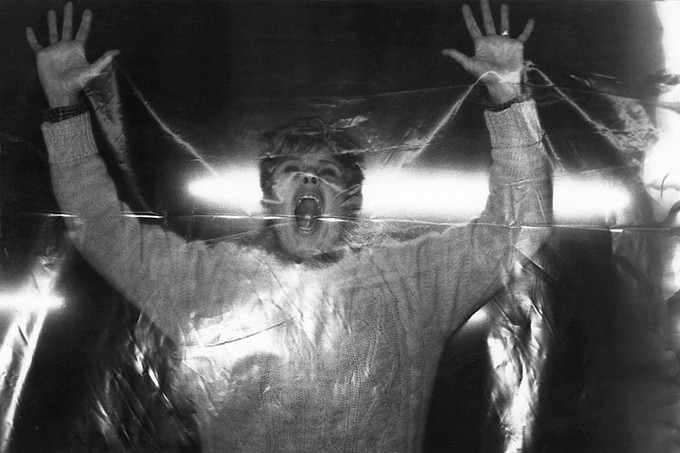 One of the recurring images in horror cinema is that of the Evil Mother, or “Monstrous-Feminine,” in which the female is represented as a castrating force who threatens male supremacy in a patriarchal world.  Due to its primal nature, the aforementioned idea has manifested in contemporary 35mm mythologies via the exploration of gender roles, archetypes, and destructive female empowerment.

The most misunderstood genre of horror film is arguably the “Slasher,” in which “Good Girls” are rewarded for their chastity while “Bad Girls” are murdered in particularly gruesome ways; these morality tales speak volumes about our view of gender roles, and contain more room for discussion than the simplistic exploitation vehicles they are often categorized as being.  FRIDAY THE 13TH stands apart within this subgenre, as it offers the clear and unique example of the Monstrous-Feminine in an otherwise male-dominated genre.  The plot twist in this claret-stained Ten Little Indians knockoff is that our shadowy killer is not a man at all; rather, the non-subservient maternal figure who threatens all sense of borders, of positions, and rules.  As in ALIEN the year prior, FRIDAY THE 13TH presents a Bad Mother who refuses to bend to the stereotypical distinctions of the “weaker sex,” and seeks to overcome those who stand in her way for the sake of her child.  Essentially, the female acts as a castrated male who then becomes the castrator.

The notion of the Monstrous-Feminine comes from Julia Kristeva and Barbara Creed, feminist writers who sought a deeper meaning in cinema via the concept of the abject.*  According to these ideas, a child exists first in a Semiotic phase (one that is pre-Oedipal), in which the child sees no differentiation between itself, its mother, or its surroundings.  It is the move toward the Symbolic — patriarchal — that distances the child from the mother.  The mother’s need is to maintain control over the child, refusing to allow it to move on to the Symbolic (as in PSYCHO); if this is challenged, she becomes the “Evil Mother,” who cannot seem to justify her own existence beyond the maternal concept.  Because she concentrates solely on the reproductive process and positions herself outside the law, she becomes a threat to patriarchal order and must be destroyed.

One can make this argument about the role of Pamela Voorhees in FRIDAY THE 13TH, which, despite its sensationalist tone, borrows freely from ancient myth.  The basic storyline of FRIDAY THE 13TH and its immediate sequel is rarely acknowledged as a reworking of Beowulf, though whether this connection was by design or strictly unintentional remains open to debate; mythologies endure, though the names and faces change to reflect contemporary cultures and society.  Jason (appearing only during the climax of the original film) is essentially a modern interpretation of the deformed child-monster Grendel, who rises from his watery home to seek revenge for the beheading of his mother — which is more or less exactly how FRIDAY THE 13TH is played out.  More than a decade after the drowning of her developmentally challenged son Jason at a summer camp on the outskirts of New Jersey, Mrs. Voorhees — presented as a single and altogether asexual parent — takes it upon herself to punish anyone working at the newly-reopened Camp Crystal Lake.  There’s nothing remotely feminine about her appearance:  she wears a frumpy sweater that removes any trace of sexuality, and sports a haircut that’s short and unappealing.  Couple this with her tendency to commit her crimes with blunt or phallic objects (knives, arrows, axes and hatchets) and you have a woman who embraces her sex without ever seeming to understand its implications beyond the base notion of motherhood.

All the while, Mrs. Voorhees seems obsessed with protecting the ideals of parenting, while punishing those who approach sex — the act preceding parenting — lightly.  She may also be equally fixated on what the act of sex represents: the dominance of the male figure (who symbolically stabs, cuts, or rapes the female), and in turn reacts by killing both the male and the female; the former for committing the act, and the latter for allowing it to happen.  The girl who gives herself willingly (and submissively) is at odds with the notion of the Monstrous Feminine, and stands as a figure to be removed for lack of personal responsibility to her gender, as well as denying the responsibility of potential motherhood.  Why not stab her to death when she’s already allowed the male to stab her through the act of intercourse…?

In the case of FRIDAY THE 13TH, childbirth is only hinted at, but its corresponding sequence is the best-remembered (if least understood) of the entire film. After beheading the murderous Mrs. Voorhees and escaping onto the lake in a boat, Alice (Adrienne King), awakens the following morning to a beautiful sight: the lake at dawn, the trees filled with color, and her rescuers (the patriarchal police force) waiting for her on the shore.  However, as order seems restored, she is attacked from behind when Jason, the long-dead inhabitant of the lake, emerges from the water to pull Alice down with him.  Jason, as presented in the film, is a hairless man-child, covered in placenta-like mud, who bursts forth from a watery womb after a night of sexually oriented deaths via phallic objects.**

Following this emergence, Jason is reborn to continue his mother’s work, but is incomplete in development, trapped in a perpetual Semiotic phase without a father figure to lead him toward the Symbolic.  In effect, he becomes the mother, carrying on with the process of castration.  This bond is hinted at earlier in FRIDAY THE 13TH, when Mrs. Voorhees actually holds conversations with Jason, speaking in both voices.  One can further the argument that he is reborn at the end of the film by implying that this repeated dialogue exchange represents the singular bond between a pregnant mother and her unborn fetus.***

Intriguingly, Mrs. Voorhees seeks to protect her offspring despite the fact that the child is already dead, but the ideology remain the same:  innocence must be governed by a female who takes a male stance.  However, unlike the patriarchal notions of a ruling class, monstrous femininity lurks in the shadows, committing her crimes off-screen, as if consciously aware that the “stronger sex” still possesses the power to prevent her actions.  It is only when she is forced to reveal herself that she does so, choosing instead to eliminate her obstacles one by one until the option is removed.  The men, however, are never the ones to force her final appearance.

Interestingly, it is a female — the “Final Girl” — who survives and ultimately triumphs over the Monstrous-Feminine concept, yet the message FRIDAY THE 13TH attempts to send is unclear at best.  Inverting the notion of the male gaze, the “Final Girl” serves as the viewer’s chief identification within the narrative; however, the “Final Girl” inhabits the physical characteristics of her Monstrous-Feminine adversary, in that Alice is capable of using her fists rather than simply screaming.  Like Mrs. Voohees, she is in no sense a traditionally passive character.  Neither one is particularly feminine in the classical sense of the word, choosing to wear clothing that downplays their sexuality, and hairstyles that border on what would be considered masculine during the era.  While Alice’s physicality is hinted at (she sleeps with camp owner Steve Christy on Thursday the 14th, and later participates in a game of Strip Monopoly), she never fully inhabits the full-blown characteristics of a sexually-aware woman.  For this reason, she triumphs over the Monstrous-Feminine assault by inhabiting similar characteristics she shares with the killer.  Yet despite the fact that she survives the climactic confrontation, Alice is dispatched by Jason during the opening sequence of FRIDAY THE 13TH PART 2.  The “Final Girl” always manages to escape, but she is never truly free, and eventually falls victim to the monster.

The notion of the Monstrous-Feminine is apparent is other horror or suspense films (most notably PSYCHO, ALIEN, IT, and DRESSED TO KILL), but it’s a concept that has been only touched on within the genre.  Typically, Slasher films are dominated by male killers enacting female punishment fantasies via decidedly phallic weapons, but the notion of the “Bad Mother” is one that appears in surprisingly few films.  While it has endured thousands of years and repeated retellings, it surfaces rarely now, perhaps because of the uncomfortable implications inherent within the concept.

*Prior to Creed “Monstrous-Feminine” referred to the role of women as victims; it was Creed who took the idea for a new, subversive spin.

**While FRIDAY THE 13TH went on to spawn ten sequels, most dropped the notion of the Monstrous Feminine in favor of Jason’s redundant exploits as a one-dimensional killer.  FRIDAY THE 13TH PART 2 was the only film in the series to continue the original’s motif, presenting us with Jason as a “mama’s boy” who has kept his mother’s head and clothing in an abandoned cabin, to whom he brings his victims to make his old lady proud.

***The character design reflects Jason’s newborn status, as he is almost always presented as hairless (or with wispy, baby-fine hairs).  He is likewise non-verbal, and predisposed toward tantrums associated with what he considers a violation of his territory (real or imagined).